Copied to clipboard
Monideepa Tarafdar’s paper—“Role of Social Media in Social Protest Cycles: A Sociomaterial Examination,” was named winner of the Association for Information Systems (AIS) College of Senior Scholars Be

Monideepa Tarafdar’s paper—“Role of Social Media in Social Protest Cycles: A Sociomaterial Examination,” was named winner of the Association for Information Systems (AIS) College of Senior Scholars Best Papers Award. The award was announced at the International Conference on Information Systems in Copenhagen in December. The paper was also named runner-up for best paper published in 2021 in the journal Information Systems Research, which is included in the Financial Times 50 top journals in business and management.

The AIS is a global organization connecting scholars in the field of information systems, and its annual conference is the most prestigious gathering of information systems academics and research-oriented practitioners in the world. Tarafdar’s research was one of only five publications chosen for the award out of approximately 300 papers that were published globally in 2021 by the leading eight journals in information systems. Editors from those journals nominated papers for the award, and those nominations were each assessed independently by multiple randomly assigned senior scholars in the discipline of information systems. The editorial board of Information Systems Research nominated Tarafdar’s paper for a best paper runner-up award, from its full set of approximately 50 papers published in 2021.

Tarafdar, who is Isenberg’s Charles J. Dockendorff Endowed Professor and PhD coordinator in information systems, wrote the winning publication with Deepa Kajal Ray, who is a data scientist with HSBC. The work, which was published in the premier journal Information Systems Research, dissects how, after a fatal gang rape in Delhi, a social media-led protest engulfed India and led to dramatic change. The incident occurred December 16, 2012, a government enquiry commission headed by a former chief justice convened within a few days, and by February 3, 2013, reforms of rape laws had passed the legislature. 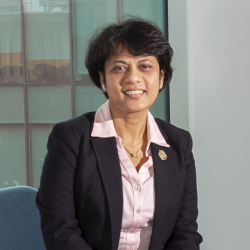 Tarafdar and her coauthor tracked social media posts about the incident across Twitter, Facebook, YouTube, online blogs, and newspaper websites. They identified consolidation (people coming together to protest the government response to the rape), expansion (people mobilizing resources for the protest), and intensification (efforts that escalated the protest and drove global awareness.) as the endogenous activities through which the protest cycle evolved. Rather than seeing discrete “stages” of these activities, Tarafdar and Ray found they occurred simultaneously and on an ongoing basis, in peaks and troughs, to drive change.

Thought to be one of India’s earliest examples of a social media protest creating change, Tarafdar says it is a prototype for how protest cycles occur today. “This is how social protest is driven—by citizens using social media ground-up, self-organizing into groundswells of protest,” she says. The paper helps to understand many protest movements powered by social media and led by young people around the world that currently occupy our collective consciousness.