Fubini, the evening's principal honoree and former long-time head of McKinsey & Company's Boston office, was introduced by the city's ex-mayor, Thomas Menino, who praised the Isenberg graduate for his unselfish strategic partnership with the city, the United Way, and other causes. Noting the impact on Boston of Fubini and other Isenberg alumni, Menino urged his Isenberg audience: "Tell the world your story."

In his keynote remarks, Fubini (pictured below third from right with Professor Schewe) recounted the life-changing impact of Isenberg and three faculty mentors.  Born into two academic families, Fubini humbly stated that he rarely met the expectations of his father, a nationally renowned physicist. (His maternal grandfather was William Machmer, a dean at UMass from 1925-1952.  Machmer Hall bears his name).

At UMass, Fubini explored engineering and some sciences then, he stumbled onto Isenberg. "It was like focusing a camera," he recalled. "I found my home." Drawn to marketing, Fubini connected with three mentor-professors.  Victor Buell and Parker Worthing are long-retired, but Charles D. Schewe, "who took me under his wing and helped me to think like a strategist," remains a force at Isenberg today.

After Isenberg, Fubini helped Johnson & Johnson's McNeill Consumer Products Division launch and grow the blockbuster drug, Tylenol. He then earned an MBA from the Harvard Business School, after which he embarked on his 33-year career with McKinsey, where he also founded and led the firm's global mergers integration practice. "My career started with those mentorships," he told the gathering. "They redirected me and [got me] to work a little harder than I wanted to. You all have a story to share. It's those stories that makes Isenberg so special."

In a video message, Young Alumni awardee Christina Calvaneso, on assignment in Tel Aviv, explained why she has become a dedicated mentor to Isenberg students. "When I was a student I thought that if you could make it in a big place like UMass, you could make it anywhere.  After graduation, I discovered that working hard wasn't enough," noted Calvaneso, who is senior vice president of Finance & Business Operations for Eyeview Video, a market leader in personalized video. I needed, she continued, to understand organization politics, generation gaps, and how to promote myself. "I had gotten my best advice from Isenberg mentors. So I came back to mentor. I took phone calls from students, and I offered advice through emails. A 15-minute phone conversation from a mentor to a student, she insisted, can make a huge difference."

the gathering. "They redirected me and [got me] to work a little harder than I wanted to. You all have a story to share. It's those stories that makes Isenberg so special."

In his own remarks, Dean Fuller challenged his predominantly alumni audience to get to know "the top quality students seated beside you." The school's dramatic rise in national rankings are important, he said, because they reflect Isenberg's growing reputation. "But what really drives me, are the job offers that that reputation brings."

The event's master of ceremonies, Beth Gamel '78 M.S., deftly orchestrated the program, adding her own inspirational insights.  Isenberg, she said, "is where most of us gained the foundation and confidence for our successful, fulfilling careers. In my case, a master's degree in the late 1970s from Isenberg gave me an entry into business and finance just as the doors were opening for women. For me, Isenberg was a catalyst for personal and professional growth."

"I've been to quite a few Boston events on this scale and bigger. This was as good as it gets from start to finish," remarked Jenny Dell '08, the former NESN Red Sox reporter who will join CBS to cover the NFL next fall. "Connecting with Isenberg's hard-working graduates reminded me why the school is so special and that I would always be part of that community of achievers.

"For me, Wednesday night was a terrific opportunity to get back in touch with old friends and meet new ones," noted Kristin Fafard '88, president and CIO of Federal Street Advisors, a boutique investment advisory firm in Boston. "Not only that, the award recipients were so inspirational, each in their own way. They made me even prouder of my Isenberg roots.  I had an extra spring in my step walking into work the next day!"

"This night was special and eye opening for me," observed Isenberg senior Abigail Wells '15. "I was able to meet distinguished alumni and see the Isenberg pride they carried and the success they've had.  I was at a table with an amazing mix, including a fellow student, faculty, and alumni. We shared our own Isenberg stories and their impact on who we are today.”

And David Fubini's mentor, Isenberg marketing professor Charles Schewe, was no less moved than the students and alumni: "I was surprised and yet thrilled to find I had such an impact on David's professional success.  Though I really think David needed little help from me.  As a professor, there is little more that could be as rewarding." 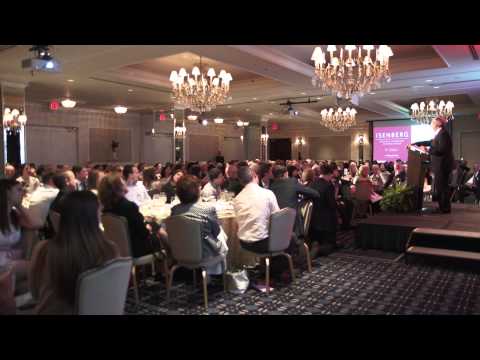