Copied to clipboard
U.S. Olympian Anita DeFrantz, the senior member of the Olympic Movement in the United States who has twice been elected vice president of the International Olympic Committee, will serve as the Mark H. 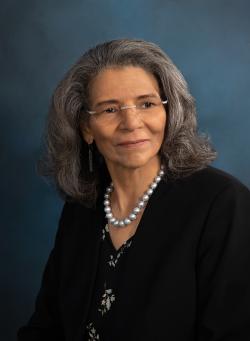 U.S. Olympian Anita DeFrantz, the senior member of the Olympic Movement in the United States who has twice been elected vice president of the International Olympic Committee, will serve as the Mark H. McCormack Department of Sport Management Executive-in-Residence at the Isenberg School of Management this fall.

DeFrantz captained the U.S. women’s rowing team that won a bronze medal in the 1976 Montreal Olympic Games. She later led athletes’ fight for the right to compete at the Moscow Olympic Games, which included suing the United States Olympic Committee.

The keynote event of DeFrantz’s visit is the Mark H. McCormack Sport Innovators Lecture, to be delivered on Tuesday, October 26, at 6:30 p.m. in Room N151 of the Integrative Learning Center. Her lecture, "Olympic Thought: Critical or Not?" will be livestreamed here.

Along with her lecture, DeFrantz’s residency activities will include classroom visits, roundtables with McCormack students and faculty, and participation in the McCormack Collection Oral History Project.

Her experiences at the Montreal Olympic Games, and later as Vice President of the 1984 Los Angeles Olympic Organizing Committee, where she was responsible for planning and operating an Olympic Village, has led her to making the success of the Olympic Movement a central focus of her life. She has worked on the national and international level to make sports and the Olympic Movement more inclusive.

"We are honored to have Anita DeFrantz join us as the McCormack Executive-in-Residence this fall, adding to the impressive group of speakers who have already shared their stories of innovation and career insights with our students and faculty," said McCormack Department Chair Steve McKelvey. "Her passion and commitment to sport equality and social responsibility exemplify the spirit of the sports industry.”

During her 28 years as President of the LA84 Foundation, she worked to serve youth through sport and to enhance the knowledge of sport and its value in communities.

In 1986, DeFrantz was elected a member of the IOC—she was the first African American and first American woman to serve on the committee. From 1989 to 1994, she served at the IOC’s Program Commission, focusing on increasing the number of women’s competition opportunities in Olympic programming; she is credited with the acceptance of women’s soccer and softball. In 1992, she was elected to the IOC Executive Board and appointed to the IOC Olympic Program Commission. In 1995, she was appointed chair of the Women and Sport Working Group, and in 1997, she was the first woman elected to a four-year term as Vice President.

In 2016, DeFrantz established the Tubman Truth Corporation and currently serves on the LA2028 organizing committee for the 2028 Summer Olympic Games. From 1991 to 1999, DeFrantz was named one of the 100 most powerful people in sport by The Sporting News, and in 2003, Sports Illustrated named her one of the “101 Most Influential Minorities in Sports.

About the McCormack Department of Sport Management: