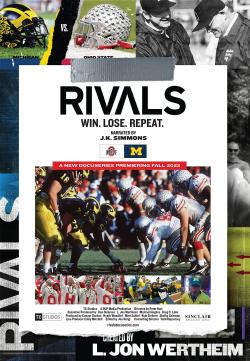 In 2004, David Tyler, then a graduate student at the University of Massachusetts Amherst, was exiting the Mullins Center after the men’s basketball team beat the University of Connecticut when he heard something surprising coming from a crowd of students.

“The students were chanting ‘Yankees suck’ as they were leaving the arena. I was like, ‘What is going on? Wrong sport, wrong level, wrong season; why is this happening?’” said Tyler, now an associate professor of sport management in the McCormack Department of Sport Management at the Isenberg School of Management. “That one moment, more than anything, is what put me on the path that I’m on—of trying to understand what was going on there, why they were doing that.”

Since then, Tyler has been dedicated to researching sports rivalries—work that has led to his featured role in a brand-new documentary titled RIVALS, set to debut nationwide on the Tennis Channel on November 20 at 7 p.m. EST. Created by Emmy-nominated journalist and author Jon Wertheim, the film delves into what stokes the storied football rivalry between the University of Michigan and Ohio State University.

During his time in the Ph.D. program at UMass, Tyler and classmate Joe Cobbs, now a professor at Northern Kentucky University, began researching sports rivalries in earnest. The pair formed the Know Rivalry Project, a coordinated research effort studying the larger concept of intergroup connections through the lens of sports rivalries. They also created KnowRivalry.com, a website to share their findings that visually represents survey responses from sports fans.

“That’s how the team behind the documentary found and connected with us,” Tyler said about the Know Rivalry Project. “They wanted to take a more academic approach to this topic than what is often done in sports documentaries.”

After many Zoom calls, the filmmakers ended up bringing their production team to Amherst to interview Tyler.

“They recorded a few days on campus, at my house and around town. I thought they might just show a few clips from the interviews, but as it turns out, they ended up using our research as the framing device for the film,” he said. “We focused on what we call the 10 ingredients of rivalry—the antecedents to what sparks a rivalry—and they used that to tell the story of Michigan versus Ohio State.”

According to Tyler, the documentary team was more interested in what he and Cobbs had discovered when it came to rivalries in general than their insights on the Big Ten Conference duel specifically.

“They had better people to talk to for a lot of what they wanted to do with Ohio State and Michigan,” he said. “For us, it was really about the social science side of rivalry.”

In fact, Tyler shares screentime with Archie Griffin, the only two-time Heisman Trophy winner; legendary players Dan Dierdorf and Keith Byars; Academy Award-winning actor J.K. Simmons (who is also a huge Ohio State fan and narrates the film) and many others.

Tyler admits he was awed by the massive production crew that came to Massachusetts to interview him. This was the first high-budget project he’d ever been involved with.

“It was awkward for me at first when we sat down to do the interview. I was just bad, but once we started to talk about the properties of rivalry, I clicked into teaching mode, and then it was fine,” Tyler said. “Then I could actually put coherent sentences together.”

Tyler also said it was very fun for his two daughters to see behind the scenes of the film their father was participating in, since some filming took place at the family’s house.

“They loved it, and they were asking questions,” Tyler said of his daughters. “The crew was wonderful about working with them and educating them. To me, that was worth the whole thing, for my kids to get that exposure.”

Ultimately, RIVALS breaks Tyler and Cobbs’s research about intergroup connections—which they believe goes beyond just sports—out of the silo of academia and into a wider audience.

“We can talk about identity and how we connect as groups more openly and get more understanding in a sports context. It’s a lot harder to tease out those ideas with touchier subjects like politics and religion,” Tyler said. “But through sports, you’re still getting that understanding of human psychology and human behavior, which can inform our understanding about how we interact with one another in general.”