“You need to dig deep to find your self-motivation to work harder, to move forward,” remarked Nicole Simeral ’02, one of two keynoters at the second annual Women of Isenberg Conference, on February 7. Coordinated by the student group Isenberg Women in Business, the day-long event attracted 210 members of the Isenberg community, including 42 alumnae and a dozen Isenberg faculty and staff members. Alumnae and faculty participated on nine panels that explored career development and workplace issues. The 150 students in attendance gained insights from the panels, networked with alumnae, and attended a career reception with the event’s corporate sponsors Fidelity Investments (principal sponsor), Target, Ernst & Young, Women for UMass Amherst, Vistaprint, KPMG, Liberty Mutual, and PricewaterhouseCoopers.

In her presentation, Nicole, an Isenberg HTM graduate, described her obsession with hospitality and her passion for creating unique experiences that “make the heart skip a beat.” She recounted her transition from eight years as Director of Catering Sales at the 5-star Boston Harbor Hotel to her own start-up, Simeral and Company, which plans and coordinates high-end weddings and corporate events. Combining sweat equity and an appetite for risk, Nicole earned 2014 Best Wedding Coordinator in Boston honors from Boston Magazine. In 2013, she organized the Red Sox’ World Series celebration at Fenway Park. Last year, she coordinated 46 events. “No one gives you the road map; you have to figure it out,” she said.

“Our students and alumni are known for their work ethic and their grit, not for any sense of entitlement,” undergraduate dean Linda Shea told the gathering. That was evident in remarks from the second keynote speaker, Kelly O’Kane ’10. A high-achieving finance major at Isenberg, Kelly aspired to follow in the footsteps of Isenberg graduate Drew Schwartz ’07 as an analyst with the San Francisco-based investment house, Piper Jaffray & Co. “But I totally bombed the interview,” she confessed, growing cold feet with her interviewer at the upscale Four Seasons restaurant.

“Fortunately, Drew went to bat for me and I got a second interview,” Kelly continued. For that, she recast her personal narrative with help from the Chase Career Center’s Kim Figueroa. And she internalized several touchstones that she shared with her audience: It’s not what you know, but who you know; your personal attitude is everything; and you belong at the table (with anyone, anywhere). Kelly aced the interview, became a top technology analyst with the firm, and in 2012 joined the venture capital firm, Institutional Venture partners, where she is currently a senior associate. Next fall, she will enter Stanford’s MBA program as a full-time student.

Keynote speakers and panelists explored a variety of issues—some specific to women and others to all business practitioners. For Alexandra Maider, a first-year MBA student, both were welcome. “For me, it was, above all, valuable to hear from so many women—their voices, perspectives, and stories,” she emphasized. All-women panels, she noted, resonate very differently from typical business panels, many of which are dominated by men.

A panel on Networking emphasized proactive planning, execution, and follow-through. Internet sites like LinkedIn have become indispensable in researching leads for one’s network, the panelists agreed. They also advised asking a mentor or “coach” for advice in making new connections. “You’re not going to get anything if you don’t ask,” observed a panelist. And after connecting, you have to follow-up, remarked another.

Succeeding in a Startup, noted panelists in a session devoted to the topic, requires a special aptitude for risk and adaptability. You must be willing to jump up and do something you haven’t done before, one panelist observed. In startups, multitasking, flexibility, and open-mindedness are at a premium. Working at a start-up allows you to build a broad skill set you won’t acquire at more established companies.

The higher you rise in a company, the more weight your words, actions, and their consequences will carry, observed members of the panel How to Grow to C-Level Positions. C-level positions carry immense weight of responsibility, so exercise care and circumspection every step of the way. “It’s not about you; it’s about your team . . . word choice matters; you have to believe and set the example,” one panelist remarked.

One participant in the panel Women in Sports remains a rare female agent representing professional football players. “You have to dig deep to find your confidence; you have to be assertive,” she remarked. “For me, being a woman at the negotiating table has been a differentiator—a distinct advantage.” A second panelist—a 2012 Isenberg graduate—has encountered few gender-related obstacles en route to her role with a leading sports marketing and media agency. While at Isenberg, she held internships with the Patriots, Red Sox, Bruins, and the entertainment and media agency, IMG. “Take advantage of every opportunity,” she advised.

“The biggest problem with women is that we don’t ask. Don’t think that you’re asking for too much. Ask for what you want,” panelists emphasized in a session devoted to Career Advocacy. Share your goals with your supervisors. Otherwise, don’t expect them to understand your career aspirations, panelists agreed. And, they added: be confident in your abilities and proud of all that you bring to the table as a woman.

Technology Takes the Stage at the Annual Women of Isenberg Conference 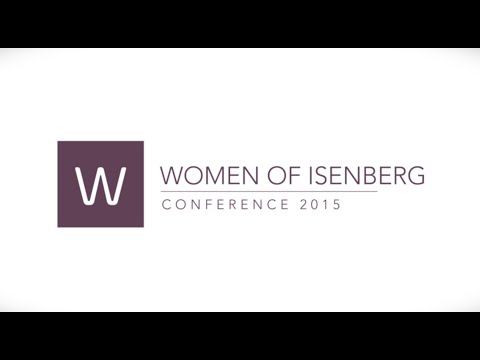