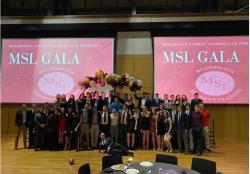 On February 11th, the McCormack Student Leaders (MSL) Club held their first annual MSL Gala. The Gala was created as a celebration of success for the club as well as to serve as an awards night to honor members, alumni, and faculty who have gone above and beyond for the betterment of our club.

The program itself took place in the newly constructed student union ballroom. Beginning at 6:30 p.m., all registered club members arrived and were treated to an elaborate buffet dinner. There were speeches from the current leaders—President Sam Safferstein and Vice President Will Kharfen—as they looked ahead towards the club’s promising future.

A large portion of the evening was dedicated to honoring the MSL Club advisor, Emily Must, director of internships and a McCormack lecturer. Current students and alumni alike shared how she has positively impacted their UMass Amherst experience.

The evening ended with a final speech from Gala Director Colleen Goonan and the club’s President Emeritus Ari Kwitkin-Close, as they handed out paper plate awards to each and every member.

To see the speeches and award presentations, visit @mccormackstudentleaders on Instagram.

The 9th Annual Women of Isenberg Conference occurred on Saturday, February 26th, 2022. The conference’s mission is to connect current students with Isenberg’s amazing network of faculty and alumni to build a community of support and empowerment among women in business.

The themes of this year’s conference included Growth, Change, and New Beginnings, reflecting the great deal of adversity our community has overcome within the past two years. The themes will continue to inspire the Women of Isenberg to reimagine their future and prosper through any obstacles that come their way. 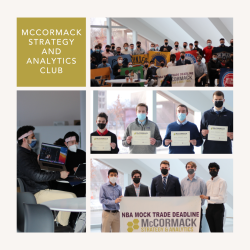 Situations involving various teams and players were administered to each team throughout the day, keeping students in each War Room on their toes and actively looking to improve their rosters. From rifts in the Memphis Grizzlies locker room to trade demands from Zion Williamson of the New Orleans Pelicans to teams such as the Oklahoma City Thunder & Golden State Warriors cashing in their younger assets and picks, the landscape of the NBA shifted dramatically during the Mock Trade Deadline. These “high-stress” situations also included player injuries and franchise demands as they were carefully curated and designed to emulate the chaos found in the “War Room” of the actual NBA trade deadline.

In the end, many franchises saw a dramatic upheaval, with star players such as Damian Lillard, Kawhi Leonard, Anthony Davis, and Zion Williamson finding themselves on the move.

On January 31st, the McCormack Strategy and Analytics (MSA) Club hosted a guest speaker, Dr. Ben Alamar. Dr. Alamar has joined the McCormack Department of Sport Management faculty in an adjunct role for the spring semester and is teaching Advanced Sport Analytics. He relayed lessons learned throughout his varied roles in the sport analytics world and graciously answered a multitude of questions from club members.

Among the various experiences shared was his work as part of the analytics teams for multiple NBA teams, and how he was able to implement and educate executives on the use of data. He shared his successes and delved into the process behind ensuring data-driven decisions are properly implemented. As one of the trailblazers in the implementation of sports analytics, he also revealed the best ways to break into the industry and involve analytics in a variety of careers within the field of sports. His stories from his time leading analytics for the Seattle SuperSonics, Oklahoma City Thunder, and Cleveland Cavaliers provided a window into the tangible impact analytics has on monumental decisions in sports.

Dr. Alamar answered numerous questions from students about his own career path, real-world applications of sport analytics, trends he foresees in the sport industry, and several other topics. His unique experience in sport analytics, data, and academia provided him with a wealth of knowledge that he was generous enough to share with McCormack students. MSA thanks Dr. Alamar for his generosity and willingness to give insight into the world of sport analytics.