Anita DeFrantz: The Courage to Fight for What Is Right

“My duty as an IOC member, I take to be ensuring that the games endure and flourish, so the experience that I had in the Olympic movement can be shared by people,” DeFrantz said during the speech.

Before delivering the keynote, DeFrantz—the senior member of the Olympic Movement in the United States who has twice been elected vice president of the International Olympic Committee—joined roundtable discussions with McCormack students and faculty and participated in the McCormack Collection Oral History Project.

FIGHT FOR THE RIGHT TO COMPETE

Up until shortly before the 1980 Summer Olympics were due to begin in Moscow, DeFrantz would not give up in her efforts to get the United States athletes there in spite of the boycott led by the U.S. Olympic Committee in protest of the Soviet invasion of Afghanistan the year before. She combed through the Olympic charter and found a section that stated that athletes who had a problem with their National Olympic Committee could enter the games through their international federation. All that was needed was the official list of athletes competing, but the U.S. Rowing organization was relentless and refused to give up the names. It was then that DeFrantz was forced to accept that she and the rest of the United States Olympic team would not get the opportunity to compete.

DeFrantz was recognized by the International Committee for her efforts with the Olympic Order, an award that goes to those who have made particularly distinguished contributions to the Olympic Movement. Still, she remains frustrated to this day about having missed a chance to compete in Moscow.

“What was taken can never be given back,” DeFrantz said in an interview. “I realized, we were the team with no result. We had all worked hard. We had all become eligible to compete at the games and we’ll never know. The world will never know of us.”

DeFrantz explained that there was no threat of danger to the athletes, which would have justified keeping them home. To be an Olympian, one has to compete at the games. Those who qualified in 1980 will always be a member of the United States Olympic team but will never get the official title of Olympian.

DeFrantz received death threats and mean messages over her decision to sue the United States Olympic Committee in 1980. But her experience fighting for the rights of athletes prepared her for her current role in the Olympic organization and her ability throughout life to create change.

Since women were first allowed to participate in the Olympics in 1900 in Paris (in sailing, golf, tennis, croquet, and equestrianism only), the events have only slowly added opportunities for women to compete. While chairing the women in sport committee, DeFrantz made it part of her mission to travel the world and encourage women to enter the world of sports.

“First you educate people, but secondly create more Olympians,” she said. “Every sport now has equal opportunity for women and men.”

In 1997, DeFrantz was the first woman elected to serve as vice president for the International Olympic Committee, and despite not having a running opponent, she worried that voters might reject her. Still, she risked it and put herself out there—an ability that runs in her family.

As a fourth-generation civil rights activist, DeFrantz grew up with the idea that there was no barrier for what she could do. In her high school, there were no sports opportunities for girls, so it was music that provided the team experience for DeFrantz. Yet, after years of watching her three older brothers compete, she longed for the opportunity to participate in sports as well. 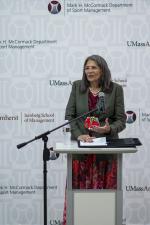 As a child, DeFrantz spent a lot of time at Indiana University as her mother was finishing her undergraduate and master’s degrees. By the time DeFrantz was preparing to go to college, she decided that she had had enough of Indiana and wanted to venture elsewhere.

Connecticut College was a school that she knew very little about, but after hearing someone sing its praises, she decided to apply. That was where she learned about rowing.

The rowing program began during the fall of her sophomore year, and she was recruited to attend practice. She loved the sport’s focus on team coordination rather than direct confrontation with opponents, and she loved the opportunity to be outdoors. After she made the team, she was demoted to junior varsity, but her coach continued encouraging her, saying that if she worked hard enough, she could be an Olympian one day. Although she thought it was ridiculous, DeFrantz was determined to prove that she was worthy. She continued rowing when she started law school at the University of Pennsylvania, and succeeded in making the 1976 Olympic team.

A PLACE OF PEACE AND MUTUAL RESPECT

Life in the Olympic Village in Montreal in 1976 was harmonious. People from different countries, with different skin tones, genders, ideas, and beliefs were able to live together in peace and mutual respect, DeFrantz recalled. They were going through the same experiences at the same time. It was there that she realized what life could truly be like.

“The Olympic Village is a magical place,” DeFrantz said in the interview. “For me, it was the first time I realized that a better world was possible.”

Diversity and inclusion are essential for the future of the sports industry, with the need for more voices, viewpoints, and ideas, she stressed in her keynote address: “We are one race, the human race. We’re all the same, and yet we are each unique.”